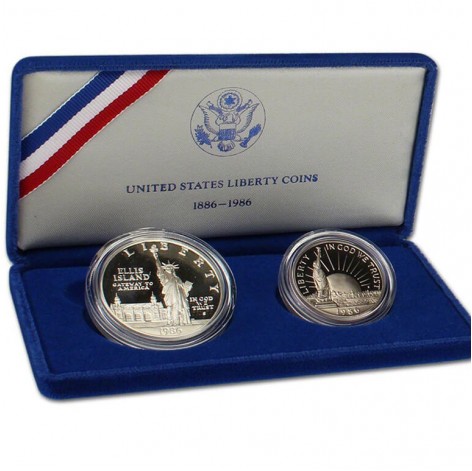 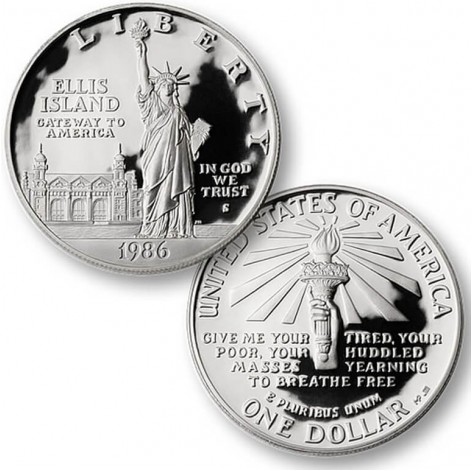 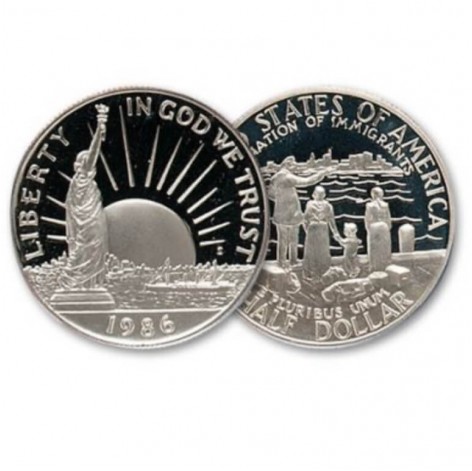 The Ellis Island Dollar obverse inscriptions are Ellis Island, Gateway to America in the left field and In God We Trust and the Mint Mark is in the right field along Lady Liberty's bottom skirt line. Liberty boldly spans the arc of the rim from 11:00 to 3:00. The 1986 date is set in the in the base at the bottom of the obverse.

The reverse of the Dollar coin features the Blazing torch that Lady Liberty holds high the blazing beacon of Freedom. Inscribed in the fields crossing the handle of the torch are the words form Emma Lazarus' poem; “Give Me Your Tired, Your Poor, Your Huddled Masses Yearning to Breath Free”. United Sates of America spans the the rim from 9:00 to 3:00 accented by the bright light of Liberty's torch. At the bottom of the coin is E Pluribus Unum and the denomination One Dollar at the bottom.

The Ellis Island Half Dollar obverse features a large sun shedding it light on the Statue of Liberty reflecting the bright promise of freedom offered by the welcoming Lady Liberty standing watch over the harbor. The words Liberty and In God We Trust circle the inside of the rim framing the coins design from 8:00 to 4:00.

The reverse of the Half Dollar coin features an immigrant family standing of the dock at Ellis Island looking across the harbor to the promise of a new opportunities. United States of America frames the design from 9:00 to 3:00. Inside and centered at the top of the coin are the words A Nation of Immigrants. E Pluribus Unum and Half Dollar unobtrusively arc the bottom of the coin.

This two coin set comes packaged in the original U.S. Mint packaging with the Certificate of Authenticity.